Licensing Works! has set the Licensing Expo to introduce licensees to the brand and is seeking new licensing and merchandising partners in all key categories to include toys, collectibles, plush, games, puzzles and costumes, publishing and stationery, apparel and accessories, party goods, consumables, home and room décor, jewelry and tech accessories, as well as QSR promotions and advertising tie-ins.

“We are so excited to represent this infectiously humorous property with its cute kawaii design and wonderful happiness positioning that will transcend preschoolers to teenagers through young adults,” noted Leslie Levine, Owner of Licensing Works.

Molang airs on Disney Junior and also can be viewed online at Disney Junior http://disneyjunior.disney.com/molang . The brand is supported by a strong social media campaign found on Facebook, Twitter and Tumblr.

Laurence Papon, the head of licensing at Millimages, added: “Dozens of broadcasters committed to season one based only on a pilot which resulted in our extensive sales globally (143 countries worldwide). Season two is already in production with presales confirmed to dozens of leading broadcasters around the world.  Strongly supported by Disney Junior’s outstanding performance, all lights are green for our adorable Molang. We are delighted to have Licensing Works! on board at this amazing time. Their extensive experience will result in Molang becoming a highly recognized brand throughout North America. We are thrilled with Molang’s enormous potential.”

About Millimages SA: Millimages, created by Roch Lener, is one of the leading groups in the European Audiovisual. For over 20 years, Millimages produces and distributes films and animated series with a rich catalog of more than 500 hours sold worldwide. For more information:  www.millimages.com 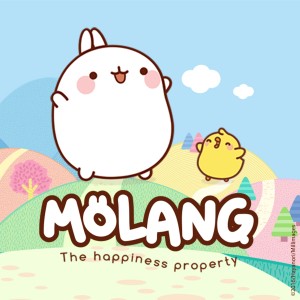