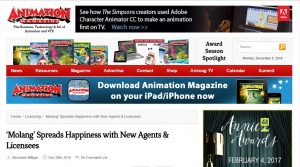 International Emmy Award-nominated 2D series Molang (104 x 3’30″), developed by Millimages and based on the delightfully squeezable characters designed by Hye-Ji Yoon, has won over several new partners in the L&M sphere.

Joining Tomy as first-wave partners in Europe are Aykroyds & TDP Textile (nightwear & underwear) and Flammarion Jeunesse (publishing), among others.

Known as “The Happiness Property,” Molang is a dialog-free series sold to over 150 countries worldwide (including Disney Junior in the US, which has committed to a second season) which centers on two adorable protagonists: Molang, a joyful, eccentric and enthusiastic rabbit; and best friend, Piu Piu, a shy, discreet and emotional chick. Appealing to preschoolers up to teenagers, Molang’s adventures embody happiness, friendship, mutual respect and solidarity.